This issue of Tipití grew out of a 2016 workshop held at King's College, Cambridge in honor of Stephen Hugh-Jones. Guest editors Chloe Nahum-Claudel and Olivier Allard have taken the initiative to bring the project to fruition and have contributed an Introduction that provides an overview of Stephen's career and the contents of the present issue. Five papers by Stephen Hugh-Jones are featured, including one never-before-published. Three are published in English for the first time and all have been, to a greater or lesser extent, fine-tuned by the author for publication here. This special issue also carries comments on two of these articles and five original contributions by anthropologists who, from different angles, draw on and extend the insights and interpretations found in Hugh-Jones’s work. In addition to the special issue content, readers will also find a comparative article on transgender relations by Drs. Dziubinska and Dias. The editor would like to thank the anonymous reviewers who contributed so much to the improvement of the papers. Special acknowledgement is also due to Kevin Richeson for his superb editorial and production work and to Joe Fitzgibbon for his close copyediting. Yijie Zou chipped in with useful editorial help. Outgoing SALSA president, Carlos Londoño Sulkin, incoming president, Jeremy Campbell, and Treasurer/Secretary, Laura Zanotti, also provided crucial encouragement and support during the production of this issue.

Cosmology and Practice in Amazonia: The Inspiring Career of Stephen Hugh-Jones
Chloe Nahum-Claudel and Olivier Allard

The Origin of Night and the Dance of Time: Ritual and Material Culture in Northwest Amazonia
Stephen P. Hugh-Jones

Good Reasons or Bad Conscience? Or Why Some Indian Peoples of Amazonia Are Ambivalent about Eating Meat
Stephen P. Hugh-Jones

The Shuar Writing Boom: Cultural Experts and the Creation of a "Scholarly Tradition"
Natalia Buitron and Grégory Deshoulliere

Singularity on the Margins: Autobiographical Writings among the Shuar of Ecuadorian Amazonia
Grégory Deshoulliere and Natalia Buitron 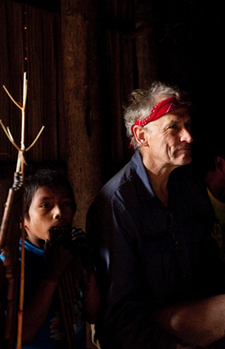